Cochlear implant – getting your hearing back

Regaining hearing with a cochlear implant

Still until 30. September 2018, the International Week of the Deaf draws attention to the importance of sign language. In fact, in Germany alone, around 80.000 deaf and about 16 million hard of hearing people. More and more of them are able to regain their hearing thanks to new technologies and surgical methods using cochlear implants.

Anna and Sebastian (names changed) gave their child a loving pep talk while still in the womb. After birth, singing and storytelling were among the most common forms of affection they gave their baby. It was not until the child was three months old that the parents learned that their child had never heard any of their words. He is so severely hearing impaired that only sounds as loud as a jackhammer can reach him.

In the Department of Otorhinolaryngology at the University Hospital Regensburg (UKR), Anna and Sebastian, who have been diagnosed with profound hearing loss, also receive the therapy option cochlear implant (CI). A CI can replace a limited inner ear function. To achieve this, specialized surgeons such as PD Dr. Pingling Kwok, senior consultant at UKR’s Department of Otolaryngology, a receiver unit with a magnet into the skull bone and a connected electrode array into the inner ear.

A microphone attached to the outside of the ear then sends signals to electrodes in the inner ear via a coil on the skull held by the magnetic part of the implant. This stimulates the auditory nerve and creates a hearing impression. About 30.000 people in Germany can once again participate in their acoustic environment.

“With cochlear implants, we enable severely hearing-impaired and completely deaf people to access the world of hearing at any age, regardless of whether one or both ears are affected. With a CI, we can even achieve better speech understanding than with a hearing aid in cases of progressive profound hearing loss.

With unilateral deafness, directional hearing is finally possible with a CI,” evaluates Professor Dr. Christopher Bohr, Director of the Department of Otorhinolaryngology at the UKR, on the benefits of CIs.

Due to recent advances by implant manufacturers and refinements in surgical methods, CIs are now an option for many more people than was the case a few years ago. “The latest generation of cochlear implants is MRI compatible. We expect the second model with this technology to be approved shortly, and we will be fitting the first patients with it this year.

We can now implant patients who were previously advised not to have a cochlear implant because of the MRI examinations they were expected to undergo,” Dr. Felix von Scotti, senior physician at the Department of Otolaryngology at the UKR, from. Until now, a CI had to be explanted before an MRI scan and then implanted again, because the magnet in the skull bone can cause problems in the MRI scan.

These new developments are especially beneficial to babies like Anna and Sebastian’s: the likelihood of needing an MRI scan in the course of a lifetime is immensely high.

But patients who receive a CI due to increasing hearing loss or deafness in adulthood also benefit from this new technology: For example, a diagnosis of back pain, dizziness or cancer is often made with an MRI. Diseases that affect a large part of the population and therefore also many people who are hard of hearing or deaf. In the latest CI models, the implanted magnets are mounted on movable bearings, which makes MRI recordings possible.

With the so-called ‘soft surgery’, residual hearing can be preserved at the UKR when a CI is implanted. “The electrode is not inserted completely into the cochlea. It will then only cover the frequencies that the patient can no longer hear. The low tones continue to be processed by the natural auditory system,” explains PD Dr. Kwok.

UKR’s CI experts conduct hearing tests and hearing aid reviews to determine if the hearing aid fitting is still adequate. “What many don’t know: When hearing aids reach their limits, some patients are better served with a unilateral or bilateral cochlear implant. For social participation, this treatment is a blessing,” summarizes Professor Bohr. 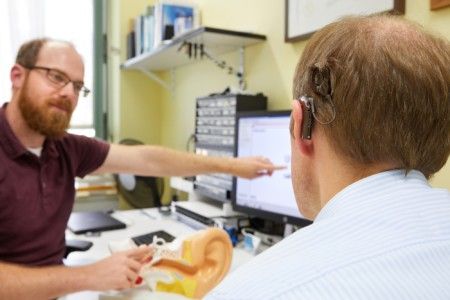 The prerequisites for a CI are that the cochlea and auditory nerve are intact, the central auditory pathways are not disturbed, and there are opportunities for rehabilitation after the procedure.

The Department of Otorhinolaryngology of the UKR cooperates with the Institute for Hearing and Speech in Straubing as the Bavarian Cochlear Implant Center Regensburg-Straubing, the oldest and most experienced CI center in Bavaria. Hearing loss bordering on deafness or profound hearing loss in infancy and early childhood can have a massive impact on a child’s speech development.

For this reason, CI therapy in children should begin as early as possible. For this reason, the Bavarian Hearing Screening for the identification of hearing disorders in newborns was initiated by the Department of Otolaryngology of the UKR more than 20 years ago. This means that an indication of a hearing disorder can be detected just a few hours after birth and therapy can be started at an early stage.

Dietary change How to stay motivated to achieve your goals